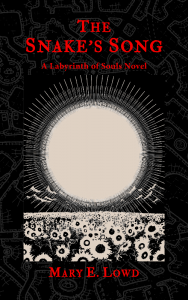 Excerpt from The Snake’s Song: A Labyrinth of Souls Novel, published by ShadowSpinners Press, March 2018

The snake sang and mice knew better than to listen.

And neither did squirrels.

But one day, a gray squirrel named Witch-Hazel stopped to listen to a soft hissing carried on the wind, a susurrus coming from a tunnel, hidden beneath a bush.  With melancholy sighs and mesmerizing murmurs, the hissing voice sang a song of days gone by, days long ago when the earth and sky and underground were bound together with a river that flowed in endless, looping circles; tree branches embraced the heavens, and tree roots held the depths in their woody arms; and all the creatures of Earth could make a pilgrimage into the sky to meet the All-Being who had created every animal.

“What happened?” Witch-Hazel chittered, her voice small and filled with wonder.  She had never heard any story or song like this one before.  Squirrel stories were about storing nuts for the winter, finding buried treasure that you’d forgotten, and squabbles over who got to live in the best branches.  They were small.  This song was the size of the entire world.

From the darkness under the leafy boughs of the bush, the whispering song answered:  “The world cracked.”

Witch-Hazel chittered in alarm, as if the world were cracking now beneath her fuzzy feet.  Her bushy tail quivered, and she felt the need to dart up a tree and hide in the highest branch.  But she didn’t follow her instinct.  The story had her hypnotized, and she barely flinched when she saw the twin pools of gold resolve in the dark of the bush.

Snake eyes.  Staring at her.  Unblinking.

“The world cracked, and we are all shattered fragments, a poor broken reflection of the All-Being who created us.”

“Tell me about the All-Being,” Witch-Hazel asked breathlessly.

“The All-Being is why birds can fly, fish breathe water, beavers are builders, and bees can turn pollen into honey.  Each of them reflects the glory of the All-Being.”

Witch-Hazel wondered how she reflected the All-Being’s glory.  “How about squirrels?” she asked.

The golden pools withdrew, deeper into the leafy darkness of the bush, and the hissing voice drew in a sharp breath.  “Squirrels can find lost treasure.”

Witch-Hazel was disappointed.  She remembered with shame the shining trove of chestnuts she’d buried last autumn.  She’d searched for them all winter, digging under every tree root that bumped out of the ground just-so, but none of them had been the right root on the right tree.  Her sisters and brothers had shared their troves with her, keeping her fed through the bitter cold months.

Witch-Hazel was not good at finding things.

“I’m a poor reflection of the All-Being then,” Witch-Hazel said, grabbing her bushy tail and grooming it for comfort.

“Maybe you’re not good at finding things that don’t matter,” the voice hissed.

Witch-Hazel was doubtful.  Those gleaming meaty chestnuts would have made the winter much easier.  They had mattered to her.  Still she wondered what exactly the hissing voice meant.  “What kind of treasure would matter?”

“The Celestial Fragments.”  After those three words, the voice stopped like a sudden cessation of wind, and the stillness that followed was unsettling.

Witch-Hazel had an eerie sense that she’d heard those words before.  She reached deep into her memory, and the phrase recalled a sensation of dry grass, crumpled leaves, and the flavor of mother’s milk.  She’d heard those words when she was a tiny kitten, she realized, tucked safely inside her mother’s nest, still nursing with her littermates.  The Celestial Fragments were part of a fairy tale told to kittens.

“You’ve heard of them?” the snake hissed.  Its voice had lost some of its power.

“Yes,” Witch-Hazel agreed, backing away from the bush, realizing that she’d been falling under a snake’s spell.  “The Sun Shard, the Star Sliver, and the Moon Opal.”  She glanced toward the nearest tree, readying to dart away, but not wanting the snake to suspect she’d escaped its thrall.  So she kept talking, “One grants strength, another endless breath, and the third flight — but they’re nothing more than a fairy story for kittens.”

“Are they?” the snake hissed, withdrawing deeper into the bush, either giving Witch-Hazel space to feel comfortable or preparing to strike.  The gold pools of its eyes disappeared into the mottled darkness of the leaves.  “Strength, flight, and endless breath are traits of the All-Being; they are also the traits you would need to find the All-Being.”

Against her better judgement, Witch-Hazel asked, “Where is the All-Being?”

“High in the sky,” the snake answered.  “Deep in the blue ocean above us that was left behind when the rivers that once encircled the world dried up.”

“Why don’t the birds sing of the All-Being then?” Witch-Hazel asked.  “Surely, they know everything in the sky.”

“They cannot fly high enough,” the snake hissed from the darkness.  “And even if they could, the birds couldn’t breathe up there in the sky-ocean.  It would take the strength of a bear, the wings of a bird, and the endless breath of a fish to reach the All-Being.”  With a final teasing, hissing sigh it said, “The Celestial Fragments are down here.  You could find them.”

Then the snake was gone.

But the ideas it had left in Witch-Hazel’s head were not.  They lingered between her tufted ears.  They wouldn’t go away.  They haunted her, possessing the little squirrel with an enchanting image:  she would find the Celestial Fragments; she would take on their powerful aspects; she would meet the All-Being and look upon the creator of all creation.

Something deep in her soul was soothed by the image of herself staring the All-Being in the eye.  She saw all the aspects of the animals in this world pulled together in one remarkable creature and understood the way that she, herself, fit into the entirety of creation, represented in one being.

Witch-Hazel pictured a creature with one bat wing and one sparrow wing; a green cat eye and a yellow coyote eye; a long rabbit ear and a round mouse ear; a deer antler and an antelope horn; a hoofed foreleg and a webbed paw; a mountain lion’s golden haunches and a squirrel’s silver tail — because no creature on Earth has a tail more beautiful than a squirrel.

The little squirrel stared at the bush until she could almost make out the shape of the All-Being in its mottled leaves as they swayed in a light evening breeze.  The air swept coolly across her own fur, and Witch-Hazel was startled to realize the day was almost over.  She’d spent hours under the snake’s spell.  And she wasn’t sure she’d truly recovered from it.

She didn’t know if she ever would.

That night, Witch-Hazel slept in her poorly made nest of leaves in the crook of a branch in her favorite oak tree.  Her brothers’ and sisters’ nests were warm and cozy at night; they knew how to weave dried grasses, leaves, and twigs together into the walls of a comfortable home.  Somehow, the leaves in Witch-Hazel’s nest never behaved so well — the leaves crumbled, twigs broke, and the whole thing flew apart whenever there was the slightest wind.  She wasn’t very good at being a squirrel.

She wanted to find the Celestial Fragments.

In her nest that night, Witch-Hazel felt the empty space all around her.  The air flowed around her branch like the rivers the snake told her had once encircled the under-earth and sky.  She wanted to travel those rivers.

The next morning, Witch-Hazel made her decision.  Whatever treasures could be found beneath the earth, she intended to find them.  But first, she needed to prepare.

So Witch-Hazel dug up the only stash she could find — a clutch of black walnuts that she’d stolen from a brother and hidden in a crocus bed only a week before; then she dug up the crocus bulbs and the bulbs of a few early tulips.  They were easy to find, pointed to by their tender green shoots.  Witch-Hazel packed the bulbs and walnuts in a knapsack along with a blue winter coat her mother had crocheted and a few leaves from one of her namesake bushes — witch-hazel leaves were a useful medicine.  Then she swiped a flask of pear cider from her biggest sister’s nest — her sister wouldn’t mind — and stuffed that in the knapsack too.

Finally, Witch-Hazel left a note in her own nest for her sisters and brothers, in case they came looking for her:  “Gone adventuring.  Don’t worry.  — Witch-Hazel”

They wouldn’t come looking.  They wouldn’t worry.  They’d simply be glad she’d stopped mooching off of their winter stores and asking to squeeze into their nests on the coldest nights.  Still, just in case, she left the note.  It was what her mother would want her to do.

With serious doubts regarding her own sanity, Witch-Hazel slung the knapsack over her back and headed for the snake’s bush.  In all likelihood, there was nothing beneath the bush but the snake’s den.  And the snake.  Possibly a hungry snake.

Witch-Hazel needed to arm herself.

The little squirrel skittered through the grove of oak and elm trees, making her way toward the sprawling firethorn bush.  In the autumn, the emerald bush would burst forth with brilliant red berries.  The berries were bitter and always hurt Witch-Hazel’s stomach, but they were plentiful.  Better than a hungry night.  Right now, though, the firethorn bush was covered in sprays of white flowers.  And thorns.

Witch-Hazel broke off two long thorns and tucked them into a woven-grass belt she wore.  Now she was armed with wooden swords longer and sharper than the snake’s fangs.  The swords made her feel safe.  Although she knew it was sheer craziness to enter a snake’s den, she also felt it would be crazy to continue living her quiet life of petty frustrations, hiding nuts and losing them, when there was a chance she could discover the lost Celestial Fragments beneath the Earth.

Witch-Hazel made it to the snake’s bush and entered the leafy darkness with both firethorns drawn.  Her paws quivered, and her tail twitched nervously.  Yet she felt like the Sun Shard, Star Sliver, and Moon Opal were calling to her.  She could hear them singing her name, begging for her to find them.

Witch-Hazel squeezed into the small round hole under the bush.  She’d never entered a snake’s lair before.  To her knowledge, no squirrel ever had.  Once she was inside, the hole opened up into a passage large enough for her to walk upright.  She kept her firethorns in front of her.

To read more, pick up a copy of The Snake’s Song: A Labyrinth of Souls Novel, available now from Amazon and the Kindle store.