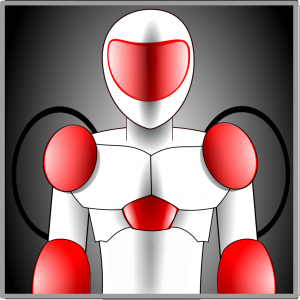 I’ve been seeing  a lot of interest in my robot stories, ever since “The Three Laws of Social Robotics” came out in Analog.  So this page is a guide to where readers can find more of my stories about Maradia’s robots. END_OF_DOCUMENT_TOKEN_TO_BE_REPLACED

Olea started screaming first, whiskers quivering with rage.  She was an otter and should have enjoyed tumbling and playing all day.  But she was also an adult, and Shaun was a toddler.  No force on Earth or in space could keep pace with a toddler otter — except for another toddler otter, but Shaun was a rare litter of one.  No sibling playmates.

All Olea wanted was to flop down, drape her long spine over the couch, and watch some TV show with fast-talking cats and dogs in suits throwing quips at each other.  But as soon as she grabbed the remote, Shaun pointed at the TV and chirped in his high-pitched squeak, “Cho-bolos!” over and over — whatever that meant.  Why couldn’t the doggarned kid learn to speak?  Humans hadn’t uplifted otters a hundred years ago so they could chirp nonsense words.  Language.  It was the whole point of being uplifted. END_OF_DOCUMENT_TOKEN_TO_BE_REPLACED

I stare out over my pregnant belly, feeling awkward.  Feeling irritable.  “Why wouldn’t I want to know?”

“Some parents don’t want to know,” Dr. Anders says.  “And we respect that.”

“It’s right there on your clipboard, right?” I point to the clipboard, and he holds it infinitesimally closer to his chest.  As if he’s hiding the results from me. END_OF_DOCUMENT_TOKEN_TO_BE_REPLACED