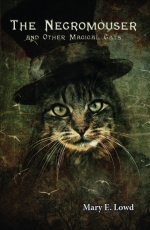 The main character from “Shreddy and the Dancing Dragon” has a history of running afoul of modern technology. So, it was only a matter of time before the cantankerous tabby Shreddy went up against a Wii/PlayStation/Xbox-like video game console.

However, the final form of the video game villain that Shreddy would face stayed up in the air until the editor of an anthology called The Dragon’s Hoard expressed her fondness for Shreddy.  Thus a beautiful marriage was born.

I’d already started writing “Shreddy and the Dancing Dragon,” expecting the villain to be a Cthulu-like inter-dimensional monster or a hoard of bees…  So, it took some reconfiguring to shift my vision for the story.  Nonetheless, I love the way that it turned out — mixing lighthearted humor with genuine horror on poor Shreddy’s part.

Delightfully, “Shreddy and the Dancing Dragon” was accepted to The Dragon’s Hoard and appeared there before being reprinted in The Necromouser and Other Magical Cats and then finally here.

If you enjoy “Shreddy and the Dancing Dragon,” you may want to pick up the collection The Necromouser and Other Magical Cats with the coupon code JW97Y (before April 15th), and if you enjoy the whole collection please consider voting for it under Best Other Literary Work in the Ursa Major Awards. Voting is open through April 15th.