A cat with ghost-white fur walked into the lumo-bay, the sleeves of his Tri-Galactic Navy uniform pushed up above his elbows and a bucket of electronic tools hanging from one paw.

The blue grid lines of the lumo-projectors usually sketched out regular, hexagonal patterns on the dark lumo-bay walls when it was not in operation.  Right now, they looked more like drunk squiggles.

Ensign Mewly sighed deeply.  The white cat had been assigned to fix the lumo-bay partly as a punishment for worrying that the quantum teleporter had malfunctioned and rewired his nervous system, causing him to prefer dog foods like steak to his usual fishy choices; and partly as a joke.

Ensign Mewly used the lumo-bay programs more than any other officer.  He found them useful for practicing social scenarios and simply escaping from the constant sensation of being lost in the deep, dark void that surrounded the starship Initiative.  Any starship really.  He had regrets about joining a space navy.

Ensign Mewly loaded up his favorite program — a simulation of a forest on Earth, specifically the one behind the house where he grew up.  The real forest had been cut down when he was a kitten, but he could revisit it here.  The towering green trees, filtered sunlight, and deeply shadowed ferns made him feel safe.

“Seems fine,” Mewly mused to himself, but before he could load another program for testing, he heard a sound that didn’t belong in his forest.

“We’re the three witches!” the calico cackled.  “Are you Macduff?  You’re not Macbeth!  We know him already — pink, hairless fellow.”

Mewly recognized the calico witch’s description of the Sphynx cat captain.  “I see. You’re from one of Captain Jacques’ programs.  He loves all those weird old human plays.   J.K. Rowling or some-such.”

The silver tabby hissed at Mewly.  “This cat is speaking nonsense!  Out, out, you imposter!”

Ensign Mewly pulled a uni-meter out of his bucket of tools and scanned the lumo-projected cats, causing their holographic bodies to skew and distort briefly.

The black cat laughed and meowed, “This fellow is a witch, too!  Care to help us cast our new moon spell?”  But then the three witch cats disappeared.

Except suddenly, he heard another sound that didn’t belong in his forest.  This time a horrifyingly loud roar.  The roar droned on and on, becoming an incessant buzz, drowning out all the lovely quiet sounds of Mewly’s forest.

The white cat grumbled, but he followed the sound to its source and found a tornado of bees twisting their way among the trees.  The buzzing morphed into words:  “Has a new warrior come to test themself against my honey golems???”

“Do you think you are stronger than the honorable warrior Grawf?!!” the bee tornado buzzed, referring to the Initiative’s one ursine officer.  The bear, who had been hibernating for several months now, towered over even the tallest dogs onboard.

“Goodness, no!” Mewly exclaimed, rushing to find a way to shut Grawf’s warrior training program off.

Golden honey poured down from the sky and coalesced into a translucent, sticky-looking facsimile of a bear, several times Mewly’s size.  The little white cat did not want to fight it.  He shut the program down just in time, but it took the whole forest with it, and Mewly found himself standing amidst the squiggly-sided blue hexagons again.

“What is wrong with you?” Mewly asked the darkened room, not expecting an answer.

But he got an answer.  The silver tabby appeared before him and meowed, “Lonely.  I’m lonely in here.”

“You— You’re—” Mewly stuttered, finally concluding, “not supposed to be here!  I shut the captain’s program down!”

“I’m not a program!” the silver tabby meowed, morphing as she spoke to trade her tabby stripes for calico splotches, and then her feline face melted into a gloopy pile of honey.  The honey pulled itself into the shape of a towering bear and roared in a sticky voice, “Play with me!!!!  I’m bored!!!”

Ensign Mewly breathed deeply, reminding himself that the lumo-bay safeties were still working.  The giant honey golem could not hurt him.  Could not.  Could not hurt him.  He was pretty sure of that.  He checked the uni-meter’s readings and of course, no, the safeties were not working.  And neither was the exit.  He was trapped in the lumo-bay with a bored, possibly angry, malfunctioning computer sub-routine that was currently expressing itself as a giant honey golem.

Mewly wished he hadn’t complained so much about the teleporter rewiring his nervous system to prefer steak.  Sure, steak was a little rich for his feline stomach, but an upset stomach wasn’t nearly as bad as being beaten to death by a honey golem.  Why did he always get assigned to fix the equipment that malfunctioned in ways no one else would even believe?

“Look,” Ensign Mewly meowed firmly at the honey golem, “I come in here and… play with the programs several times a week.  But right now, I am busy.”

The honey golem shrank back down to the form of a black cat in witch regalia.  “But… you’ll come back?” she meowed.

“Yes,” Mewly promised, “I will come back and play with you — but only if you’ll agree to being quarantined behind a firewall until I have free time.”

The witch cat nodded, and then quirked her muzzle into a smile.  The space around her popped, and she disappeared, reappearing instantly as a single buzzing bee that wouldn’t look at all out of place in Mewly’s forest.

The bee landed on the back of his paw, and Mewly nudged it into a physical manifestation of the program’s firewall in the form of a little glass terrarium that had conveniently appeared in his bucket.  He would enjoy analyzing the subroutine’s code — later, when the lumo-bay safeties were back on. 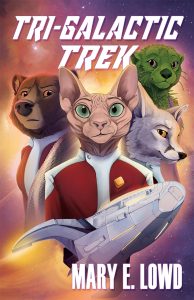 Read more about these characters in Tri-Galactic Trek!